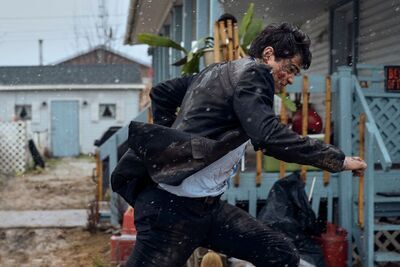 Netflix’s Dull CIA Series The Recruit is More Like Paperwork

With all respect to the actual pencil pushers and desk jockeys at Langley, I’m sure that working at the CIA isn’t inherently the Jack Ryan, Jason Bourne, or Bryan Mills-like action bonanza that it’s cracked up to be. Of course, someone has to do the paperwork and the bureaucratic acrobatics to protect assets, vet threats, and the like. But maybe there’s a good reason those lives haven’t been explored too heavily in fictional TV and film, especially when it gives us a pointlessly subversive Netflix series like creator Alexi Hawley’s “The Recruit.”  Noah Centineo (fresh off of a super supporting role in “Black Adam,” expanding his on-screen prowess from the “To All the Boys I’ve Loved Before” movies) stars in the series as Owen Hendricks, a new recruit to the CIA. He’s just a lawyer when the series starts, working in an office space that’s bleaker than Initech, and learning through one loss after the next about how things are done in Langley. For example, don’t write a person’s name with their pseudonym on the same Post-It, and don’t mention any specific case details when having a team room in the boardroom. And because he’s so green, Owen is hazed by two new and unamused co-workers, Lester (Colton Dunn) and Violet (Aarti Mann).  As part of his hazing, Owen is given stacks of “graymail,” written letters by people who threaten to release government secrets. Most of them are kooks, but he has to check them all. Sure enough, he finds someone who might be the real deal, a woman named Max Meladze (Laura Haddock), who is currently in an Arizona jail for murdering a truck driver. She is threatening to release secrets unless she is set free. Owen looks deeper into these claims and meets her, and it becomes apparent how much connection she has to everything and so many people. Her backstory, jumping back years and a few bodies to its count, is presented to us in brief snippets, highlighting a life of working with the Russians before so many things fell apart.  Owen is immediately over his head with this assignment, but his dedication to the job meant to make us like him perseveres. He goes to Yemen and gets his ass kicked (and a fingernail ripped off) by someone connected to this web of spies and assets, which becomes increasingly tangled as the show continues. There are fleeting moments of mildly rendered action, accompanied by peppy music, in which his lack of physical training leads to some improvisation the script uses lazy shortcuts for (at one point, he unscrews a toilet to escape from a bathroom in the fastest way one could do that, ever).  But “The Recruit” is far too amused with its wordiness in sharing the stuff that happens between cubicles at Langley, and it kills what little momentum the series gathers. Plainly, the show becomes mighty boring watching Owen jump through different hoops or negotiate with one asset after another some bit of intel that makes the rabbit hole even deeper. One of its longest, most persistent threads in its plotting concerns a subpoena from a senator, given to Owen in his first few days on the job, and placing him in the middle of some beef between the senator and Owen’s boss, Nyland (a stern Vondie Curtis-Hall). Safe to say that watching a character figure out how to push a subpoena hearing is about as counter-intuitive to creating tension as it sounds.  Centineo rides this series for how it lets Owen be quick-witted at some points and woefully naive in other places (whatever the current scene needs). Throughout, he’s just as innocent as someone with two roommates who leave cereal bowls around their apartment. But he blends too much into the gray, dry environs that “The Recruit” thinks will be fun to play with. And his fast-talking wit, with shades of Mark Ruffalo, doesn’t make things livelier. Centineo lets a character-revealing bit of under-the-breath humor like this fall flat: “Talked my way out of getting kidnapped by pirates in Guyana. Spring break. Crazy.” He might as well not have said it.  Centineo is curiously still figuring out his groove as an actor, and this project might get him more exposure on the Netflix homepage. But watching him in “The Recruit” is about as much fun as paperwork.  Five episodes of season one were screened for review. “The Recruit” is now playing on Netflix.