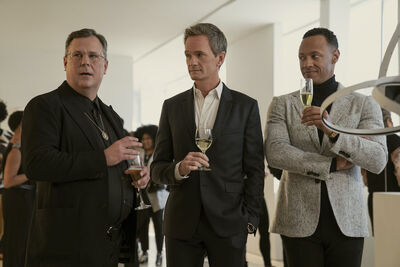 Dating in middle age is hard enough for anyone; what Darren Star’s latest trifle, Netflix’s “Uncoupled,” argues is that it’s especially hard for gay men. After all, there are the higher expectations, the obsession with youth and status, and the apps, my god, the apps. Of course, it helps if you’re rich, and white, and you look like Neil Patrick Harris. It’s territory that Star has tackled in many a show about New York’s upper-crust dating life, from “Sex in the City” to TV Land’s hit “Younger” (another show about the perils of aging in an image-obsessed world) to “And Just Like That…”. And “Uncoupled” features the best and worst of what Star has to offer: winsome performances and occasional insights into the bittersweet trials of love and aging, packaged within a cloyingly sweet, ostentatious package that makes its protagonists’ tribulations a little hard to buy into.  Harris plays Michael, a New York real estate broker (and serial monogamist) who seems to have it all: a great job, a tight bod, and a loving life partner of seventeen years named Colin (Tuc Watkins) who’s just turned fifty. But when Colin announces he’s moving out with little to no explanation or sign of trouble, Michael’s thrown for a loop, and is suddenly forced to re-enter the gay dating scene of NYC. His similarly-aged friends, gay weatherman Billy (Emerson Brooks) and out-of-shape art dealer Stanley (Brooks Ashmanskas), warn him of struggles ahead: “At our age, you’re invisible.” But of course, Michael’s rich, white, and looks like Neil Patrick Harris, so things seem to go pretty well for him. From the start, “Uncoupled” reads clearly as Star’s attempt to get into the realities gay men face when dating in their forties. And to its credit, the show occasionally lapses into some interesting, relatable material on that subject: Michael must quickly get used to modern gay dating mechanics like Grindr etiquette or the speed at which romantic prospects show hole to strangers. He struggles to connect to younger gay men who see him as a daddy dinosaur and who don’t seem to have an understanding of the haunting history of queerness just a generation or two before them.  In this way, NPH is the perfect star for “Uncoupled”—as one of mainstream pop culture’s preeminent white gay assimilationists, he’s an appropriate avatar for the kind of well-off cis gay man who just wants the loving spouse and the white picket fence that straight couples have enjoyed throughout history. Within those confines, he’s appropriately unlikable, the kind of bitchy, self-obsessed elder queen who needs to take it down a notch and do some real reflection. Michael is blissfully saved from “Emily in Paris” levels of unrelatability because Star understands that he’s kind of a blinkered asshole, and he’s the problem the show needs to solve. Still, he finds solace in other assholes both literal and metaphorical, the latter of which includes Marcia Gay Harden’s Claire, a rich but difficult client who’s selling her condo after her own husband ran off with a younger woman. Harden’s fun in the role, though it’s admittedly galling to make such a gay icon (it’s in her name!) a droll conservative woman who makes fun of pronouns.  That said, the show can’t escape the Darren Star-ness of it all, pausing only slightly to wink at the ostentatious privilege our characters engage in before uncritically reveling in it. Frankly, it’s hard to take too much pity on Michael’s furtive attempts to reenter the dating scene when A) the hookups come easy and breezy to him over the first season’s eight episodes, and B) his biggest material worries are about whether he’ll be able to afford to buy out Colin’s half of their ornate, well-furnished Manhattan apartment. Yes, it’s a blow to see the love of your life leave you after half your life together. But the show does little to establish what they saw in each other in the first place, which makes Michael’s season-long obsessions about whether Colin is seeing someone else feel like a waste of time. The supporting cast does a lot with a little, rendering thinly-sketched archetypes with just enough life to buoy their respective storylines. Tisha Campbell is a hoot as Michael’s business partner Suzanne. However, she’s less interesting around Harris than in her own subplot about her adult son Kai expressing a desire to finally know his birth father (something she doesn’t even know; it’s a bit of a “Mamma Mia!” situation). While the show takes a few too many potshots at Ashmankas’ weight for my liking, Stanley’s desperation to be seen and loved at his age feels like a more compelling version of the show we’re watching had we focused on him: a man who bucks the twink-centric body standards of gay dating life and who realistically suffers because of it. In between these moments, “Uncoupled” is a bit too cloying and corny in its sitcom rhythms to land. The dialogue is light and quippy but leans too hard on creaky wordplay like “I put the ‘mono’ in monogamy” and tittering jokes about men getting breast cancer. And its moments of poignance fall flat because the stakes around its New York-rich protagonists feel so weightless (especially considering the all-too-predictable cliffhanger that ends this first season).  The best thing I can say about “Uncoupled” is that, between its frank discussions of PrEP, the logistics of anal sex, and explicit displays of Tom of Finland-esque vintage gay art, Star is at least taking advantage of Netflix’s lack of primetime prurience. But it feels too little, too late, and is hardly likely to open the eyes of anyone besides the urbane in-group it’s talking to: six-figure gays with summer houses in the Hamptons. Full season screened for review.