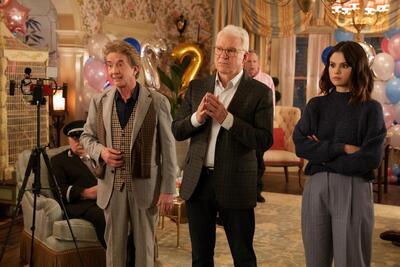 “You made [murder] feel so cozy.” Amy Schumer says that line a few minutes into the second season of Hulu’s “Only Murders in the Building,” playing a Diane Keaton-costumed version of herself. It’s a self-referential moment: Schumer states this to Oliver (Martin Short) on his podcast “Only Murders in the Building,” but she’s also talking about the murder-mystery show she’s in and the tension it pulls off.  “Only Murders in the Building” is cozy, its warmth driven by the empathy it extends to all of its characters (including its murderers). At the same time, the series from co-creators Steve Martin and John Hoffman avoids saccharine storytelling by finding humor in its subjects’ peculiarities and not shying away from the uglier aspects of the human experience. In season two, our three leads, Short’s Oliver, Steve Martin’s Charles, and Selena Gomez’s Mabel, continue to walk that line to great effect. Oliver still gets all of his calories from dips, Charles remains awkward in almost all social situations, and Mabel continues to deadpan her way through life in and out of the apartment building they share, the Arconia. But this being a second season, we all also see more layers to our favorite true-crime podcasters, particularly in how they build or maintain community—via love interests, their families, and of course their friendships with each other. The show finds humor in this layering of complexity. There’s a moment when Mabel, as the resident young person, is tasked with talking to Charles’ stepdaughter Lucy. She’s supposed to be able to understand the Gen Zer’s language and perspective but quickly gets overwhelmed. It’s a nice touch to the show’s continued cross-generational humor, which mostly pokes fun at its septuagenarian characters (real line: “She hasn’t answered any of my calls or text communications!”) Youth is fleeting and even the hippest of us will get old, the show says, and that’s not tragic, it’s delightful. A cause for a smile and a nod. Indeed, the show seems designed to make its audience nod along in knowing agreement. The first few episodes are full of lines like Schumer’s. As our three amateur crimefighters embark on their second murder mystery, they wink at each other about what lessons they can apply from their first (podcast? TV?) season.  “Only Murders in the Building” is careful to bring back the audience’s favorite supporting characters and devices from the first season. Again, we get episodes from different perspectives, dipping in and out of the lives of the Arconia’s residents. The show spends its time with everyone wisely, reminding us why we so enjoyed these characters to begin with and adding layers to our understanding of them. For example, there’s a whole episode dedicated to Bunny, peaking under her tough exterior even as we grow to understand the how and why she so thoroughly inhabits her tough-as-nails New York persona. Even perpetual lonely heart Howard gets a sympathetic reading, expanding beyond the stereotypical cat-owning eccentric. Of course, we also meet new residents, notably Nina Lin (Christine Ko), the pregnant powerhouse set to take the murdered Bunny’s role as Board President of the Arconia. She plays a sympathetic villain, learning from the best of Bunny’s legacy and figuring out the daunting task of new motherhood on one hand. On the other, she potentially forsakes the spirit of the Arconia, sometimes treating the building’s staff with contempt. As such, Nina is the perfect encapsulation of “Only Murders in the Building.” She’s a complex, vulnerable human, worthy of our sympathy even as she clearly chooses the wrong path at times. By combining new characters with old and treating them all with the same mixture of understanding, humor, and doubt, “Only Murders in the Building” continues its special ways of suspense. It’s a difficult balance to pull off once, let alone twice, and the second season prevails despite the newness having worn off. After all, there’s a reason the aging Arconia is such a desirable place to live.  The first two episodes of season two of “Only Murders in the Building” premiere Tuesday, June 28 with new episodes released weekly after that. Eight episodes screened for review.