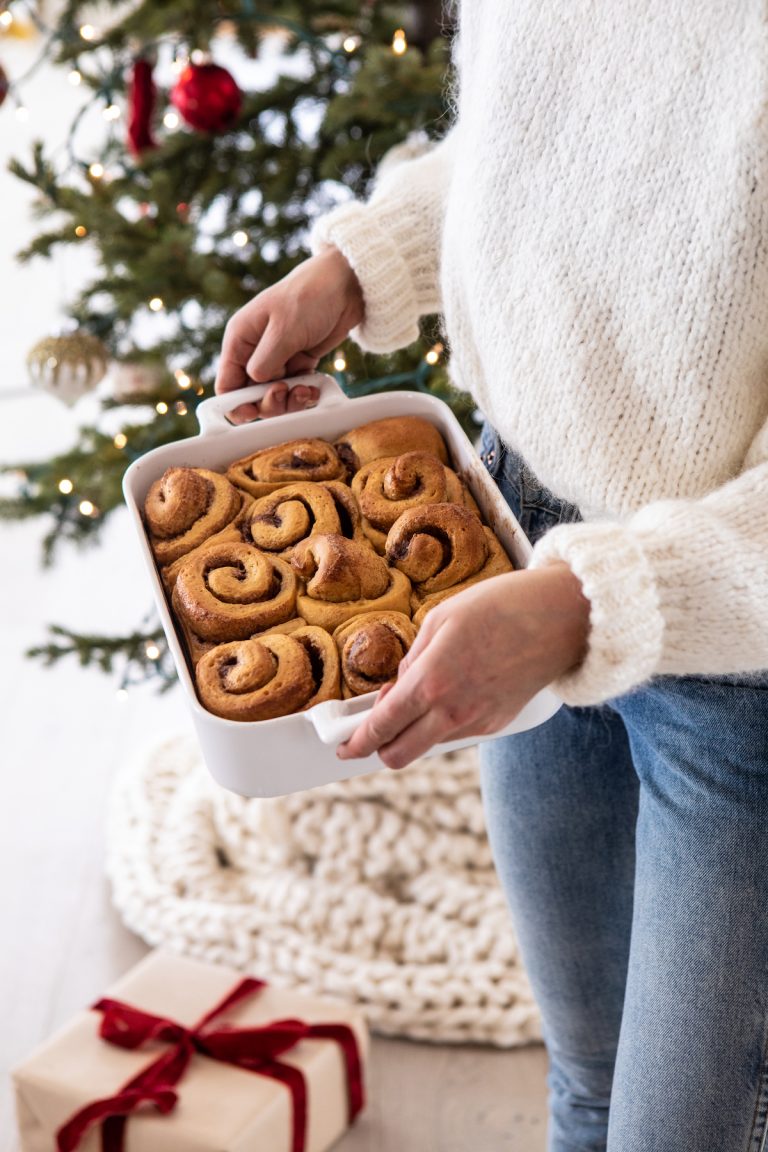 Holiday dishes are pure magic. Everyone has their classics that grace the table year after year, but it’s fun to venture into new territory every once in a while. This year, overnight gingerbread cinnamon rolls are your calling card to create a new classic. They’re a labor of love that you can make entirely ahead of time so your Christmas morning can focus on what matters.
Surprise! This recipe comes straight from one of our favorite foodies on the internet (and in print): Tieghan Gerard. Tieghan heads up the famous food site, Half Baked Harvest and is the author behind some of our most beloved cookbooks. If you want a recipe you can trust, Tieghan’s your go-to gal. And these gingerbread cinnamon rolls? They happen to be one of our faves.
(Psst… before you get to these cinnamon rolls, take a peek at how Tieghan decorates for the holidays!)

Why Tieghan Loves These Cinnamon Rolls
Tieghan is no stranger to holiday traditions. Whether it’s baking Christmas cookies, cutting down the tree, or inviting guests over for a celebratory meal, Tieghan’s got the holidays on lock. So it makes sense we’d go to the expert for her favorite (easy) Christmas morning recipe. Here’s what she has to say about this stunning breakfast treat: “I have so many favorite holiday dishes, but I think Christmas isn’t Christmas without cinnamon rolls baking in the oven. My current favorite are my Overnight Gingerbread Cinnamon Rolls.”

Tips for Making Gingerbread Cinnamon Rolls Ahead of Time
The good news is that these gingerbread cinnamon rolls were designed to be made ahead! Because the dough needs to rise overnight, you can do the majority of the work in advance and save the simple steps of baking the morning you’re ready to enjoy your rolls. You have a few options depending on how far in advance you want to prep your cinnamon rolls.
To make the night before:
Simply prepare the recipe through step four. It’s key to refrigerate the cinnamon rolls overnight, as they’ll rise too much if you leave them at room temp. Cover the rolls in the prepared baking dish with plastic wrap and place in the fridge overnight. When ready to bake, remove the rolls from the fridge and let them come to room temperature for 30-45 minutes, then bake as directed.
To freeze:
If you want to prepare your gingerbread cinnamon rolls well in advance, they can be assembled through step four and frozen for up to three months. Before baking, take your prepared rolls from the freezer and thaw them either in the fridge or at room temp. When they’re thawed, bake as directed.
To bake in advance:
If you anticipate not having a lot of time before you want to serve these, you can also bake your cinnamon rolls completely and freeze. Then, all you have to do is warm them before serving. Bake cinnamon rolls as directed and let cool completely. Cover and wrap well before placing in the freezer for up to three months. When the time comes to serve your cinnamon rolls, simply thaw and warm them in the oven.