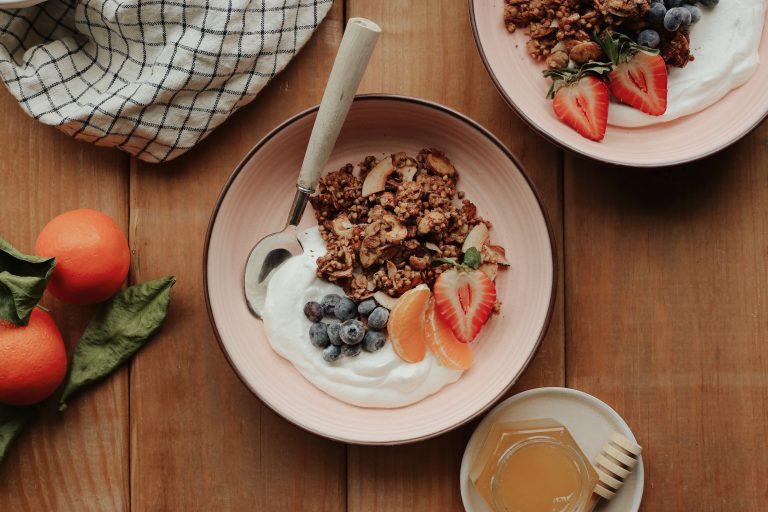 Chai Spice Buckwheat Granola Is the Coziest Start to Your Day

The inspiration behind this Chai Spice Buckwheat Granola came from a seemingly unlikely place: my dad. He’s one of those people who thrives off routine. From the time he wakes up in the morning to his weekend chore list, his personal brand is pretty much precision and consistency. This trait extends to his breakfast most of all. Growing up, we all knew dad’s cereal housed in a yellow milk carton-shaped box filled to the brim with a crunchy granola that he ate with milk accompanied by a glass of OJ. Every single morning.
Somewhere along the way, the company discontinued his granola, and you would have thought the world had come to a halt. My dad’s entire routine was upended by the removal of that carton from the shelves of the store—and trust me, he checked every retail supplier before finally admitting defeat. Instead of changing his breakfast routine to some other cereal, switching things up to an oatmeal or eggs plate, he started on a journey of recreating his go-to granola.

The Inspiration Behind This Chai Spice Buckwheat Granola
Now, we all love that morning that happens every few weeks when dad brings out the giant stainless steel mixing bowl and sets up for “granola day,” as we’ve lovingly dubbed it. The night before, he adds all the dry ingredients to the bowl. In the morning, he adds maple syrup and oil, tosses it all together, and adds the granola to a baking sheet. The next hour involves baking, tossing, baking, and turning in 15-minute increments until his granola has turned golden brown and crunchy. After the granola has had a couple hours to cool, he mixes in dried fruits and raisins. This is my favorite stage, as I lurk around the baking sheet and snack on the dark crispy chunks that form in the corners of the baking sheet.
While dad’s granola isn’t my go-to granola (raisins, bleh), his dedication to the craft of granola-making is one of my favorite things about him. It’s inspired me to create my own granola over the years, though I can’t say I’m nearly as precise about the process.

I love granola. In a bowl with milk, as a snack, or over yogurt and pancakes—I love the delicious crunch it adds to any bowl.

Tips for Making Healthier Granola
Of course, I’m always a little disappointed by how much added sugar is in store-bought brands, and I don’t always want a grain-filled option either. After a little experimenting, I’ve found my perfect combo of crunchy, flavorful, and just-sweet-enough granola.
The Base: Buckwheat Groats
Instead of using just rolled oats as the base, I replace a big chunk of the recipe base with buckwheat groats. If you haven’t had buckwheat, they’re the hulled seeds of the buckwheat plant. They have a very mild flavor and when toasted, become extra crunchy. It’s a gluten-free ancient grain and has more vitamins and health benefits than other grains like a plain rolled oat.
Maple Syrup for Sweetness
For sweetness, I add just a few tablespoons of maple syrup to the mix. The issue with most reduced-sugar granolas is that you miss out on some of the chunkiness that other granolas get when the sticky sugar binds everything together. To get around that, I’ve discovered the perfect way to clump everything together without all the extra sugar. Combine your oil and maple syrup with a nut butter! Mixing it all up creates the glue that holds all the groats and nuts together. Plus, because the groats are smaller than usual oats, they bunch up together so much better.
The Magic Ingredient: Chai Spice
For extra flavor, I reached for my all-time favorite spice blend. Trust me, go heavy-handed on the chai spice. It gives the granola an amazing warmth and flavor that’s just incredible. And don’t skimp on the salt! It enhances all of the other flavors and makes this absolutely delicious.

If you make this braised buckwheat granola recipe, be sure to give it a rating below. And don’t forget to tag us on Instagram @camillestyles, so we can see how you make this recipe a part of your morning routine. Enjoy!
This post was originally published on March 3, 2020, and has since been updated.
The post Chai Spice Buckwheat Granola Is the Coziest Start to Your Day appeared first on Camille Styles.