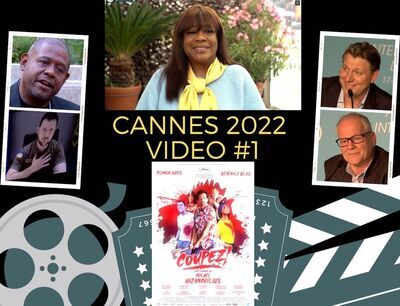 RogerEbert.com publisher Chaz Ebert’s first video dispatch from the 2022 Cannes Film Festival, directed and edited by Scott Dummler of Mint Media Works, includes commentary on the opening night screening of Michel Hazanavicius’ “Final Cut,” preceded by a speech from Ukrainian President Volodymyr Zelenskyy. The video transcript is included along with the embedded footage below… Today is the opening of the 2022 Cannes Film Festival, and we’re thrilled to be back in the south of France for the next two weeks, celebrating the magic of cinema. This year, the festival turns 75 years old. And to honor this milestone, a number of celebrations are planned. The streets are lined with classic photos of festivals past, and this year’s festival poster is a nod to “The Truman Show.” In 2022, with an admittedly ongoing pandemic and yet no mask or vaccination requirements, the Festival feels a little like “The Truman Show”: surreal. But everyone we’ve run into so far has expressed how happy they are to be back and excited for the opening night festivities. The opening ceremony was one of the most interesting in recent memory. It featured a moving, live-streamed message from Ukrainian President Volodymyr Zelenskyy talking about the importance of art in fighting for justice and freedom. Roger and I used to talk about whether movies were important during times of war and civil unrest. But we came to the conclusion that movies are an empathy machine that help us understand each other – a belief that Zelensky also expressed. He referenced Charlie Chaplin’s “The Great Dictator” by saying, “We need a new Chaplin, someone who in our time will say cinema will not be silent.” The official opening of the festival was presented by Julianne Moore, and before it was all over, Forest Whitaker received a lifetime achievement Palme d’Or.  I recall what an intelligent and humble individual he was when I interviewed him in 2011 at the Marakech International Film Festival. This year, my question to him was about the producing part of career. But while his accomplishments in the film business are legendary, I’ve been most impressed by his work with the Whitaker Peace & Development Initiative that he started in 2012, and has gone on to help humanity in Mexico, South Africa, South Sudan, Uganda and the United States.  Capping off the opening night festivities was a film by Oscar-winning director Michel Hazanavicius entitled “Coupez” or “Final Cut”. It’s about a French film crew filming a zombie movie that takes a sudden turn when real zombies apparently begin attacking the cast and crew. They’re calling this film a zom-bed-ie…a zombie comedy. And it was a little too broad for my taste, and a little too clever by half. But many in the audience really seemed to enjoy the third act. “Final Cut” is playing out of competition as are a few other notable titles this year including “Top Gun: Maverick” and Baz Luhrman’s “Elvis.” But for us, the competition films generally offer the most interest. Some of the most anticipated films in competition this year include: “Stars at Noon”, directed by Claire Denis; “Decision to Leave” from Park Chan-Wook; “Showing Up” from Kelly Reichardt and starring Michelle Williams; and two new films directed by recent Palme d’Or winners: “Broker”, by Hirokazu Kore-eda; and “Triangle of Sadness” from Ruben Ostlund. But perhaps the one film that has most people talking – and speculating – is “Crimes of the Future”: the latest body-horror film from David Cronenberg. Cronenberg has stated he expects many people to walk out of the film in the first 30 minutes. But his film won’t debut until next week, so it has lots of time to build even more expectations or even more people who pass on the film altogether. But ultimately, it’s this year’s festival jury that will pass judgement. The 2022 jury is led by French actor Vincent Lindon and also consists of British actress and director Rebecca Hall, Indian actress Deepika Padukone, Swedish actress Noomi Rapace, Italian actress Jasmine Trinca, Iranian director Asghar Farhadi, French director Ladj Ly, American director Jeff Nichols, and Oscar-nominated director and screenwriter Joachim Trier. The festival has just begun, but it has not been without a little controversy. At his day one press conference, Thierry Fremaux was asked about a recent report from Deadline.com that indicated the Festival had been attempting to censor interviews with the fest director around sensitive topics like representation of women and black filmmakers in the official selection. Fremaux’s response has been that gently revising interview statements is standard journalistic practice in France, while he went on to defend the festival’s record regarding representation. While controversies are expected in Cannes –  so are great movies. And we’ll be keeping any eye on everything: the good the bad and the ugly and then reporting back to you.   So, throughout the festival, be sure to check in at RogerEbert.com/Festivals for daily reports by Ben Kenigsberg and others along with our regular video reports. Until then, we’ll see you on the red carpet!