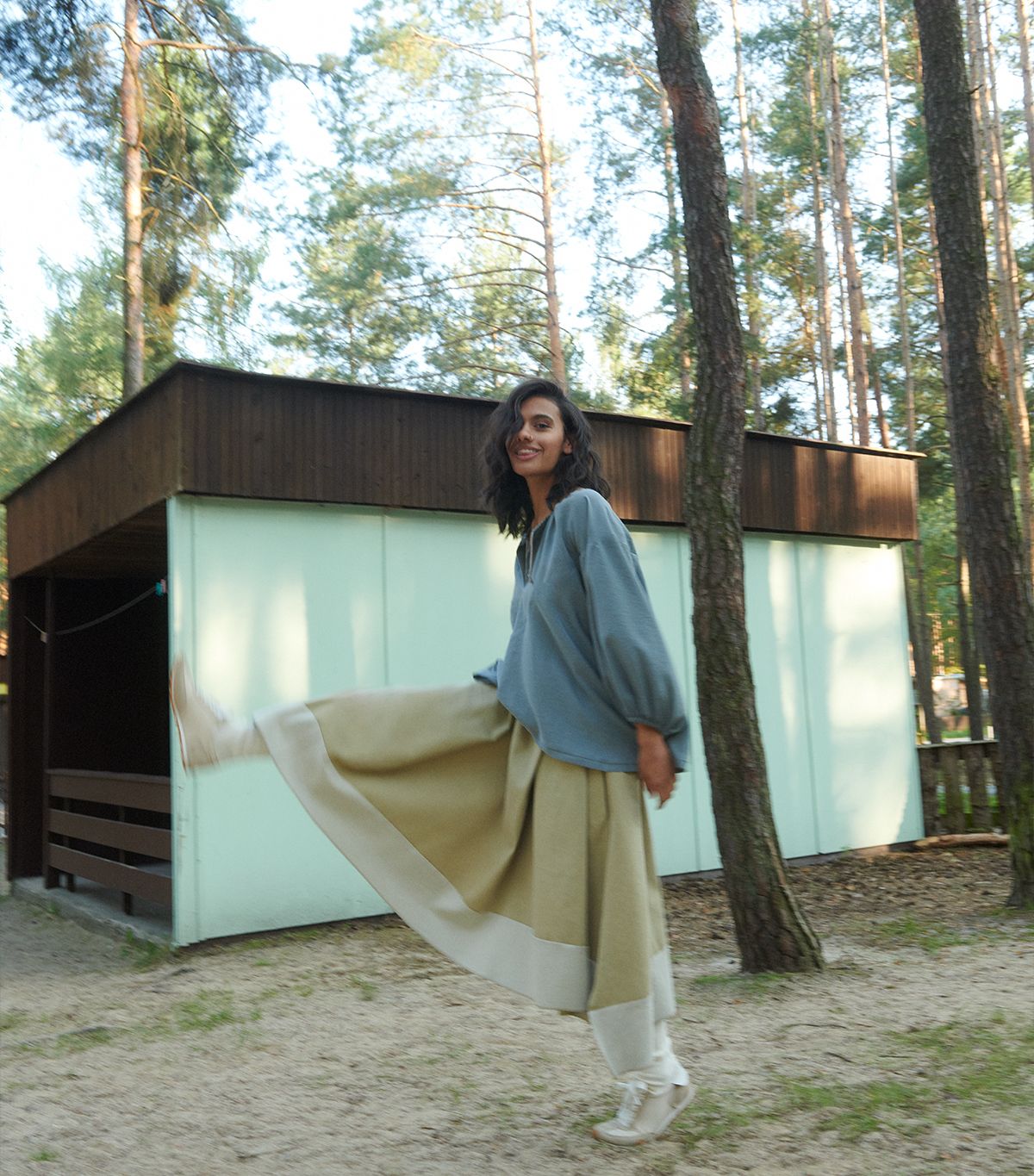 Madeleine Madden Wants to Take You on an Epic Adventure

There’s a certain pressure that comes with adapting a major book franchise. Trying to stay true to a beloved story within the confines of film and television and nail casting is a tall order when you have to both appease a dedicated fan base and lure in a new audience. But for The Wheel of Time—Robert Jordan’s high-fantasy novel series that spans 14 volumes (plus a prequel and two companion books), has sold over 90 million copies worldwide, and has been in development to be a series for some 21 years—the stakes seem even higher, a feeling actress Madeleine Madden knows all too well at this moment.The Australian native is sitting in the kitchen of her Prague apartment processing her feelings now that the blockbuster fantasy series she has been working on and keeping heavily under wraps for the last two years is finally making its debut. There are plenty of nerves, of course (“it’s been like our baby”), but there are equal amounts of joy surrounding the project. “We’re feeling a lot of people’s excitement,” she tells us over Zoom. “So many people have been waiting for literally decades for this to be made into a series. That’s been contagious, and it’s amazing to see all of our hard work come to fruition.” With its expansive world-building, immersive storytelling, and massive character list, WoT is an epic production comparable to the likes of The Lord of the Rings and Game of Thrones. The eight-part first season, now streaming on Amazon Prime Video, starts at the beginning, following five young villagers whose lives are forever changed when they are led on a journey around the world by a powerful and magical woman claiming one of them has the power to tip the balance between light and dark. The series has tapped Rosamund Pike to play the story’s fearless leader Moiraine while leaning into a fantastic group of fresh faces to play its young heroes, including 24-year-old Madden, who is a standout as Egwene al’Vere.When presented with the opportunity to audition for Egwene, Madden knew she was up for a life-changing role. Though she had already made her U.S. debut in the 2019 film Dora and the Lost City of Gold, a project of WoT’s caliber could land her on every casting agent’s “ones to watch” list. But winning the covetable part was not without its curveballs. “I was asked to fly to London to do some chemistry reads where I met Rafe Judkins, our showrunner; Amanda Kate Shuman, another writer; Marigo Kehoe, one of our EPs; and Kelly Hendry, our casting director. They were all sitting there, and I was violently ill, and a pigeon had shat all down my back, and I hadn’t noticed until I got home that evening. So the day was going brilliantly,” Madden says. Despite her less-than-desirable state, Madden wowed the room, and a week later, while back at home in Sydney, she got the call.For Madden, a self-proclaimed “lover of fantasy,” Egwene is a dream character in many senses. Having grown up in a politically minded family with multiple generations of strong activist role models—including her great-grandmother Hetty Perkins, an elder of Australia’s Arrernte tribe, and her grandfather Charles Perkins, a freedom fighter who sought to end discrimination against Aboriginal people—the actress is drawn to driven and multifaceted female protagonists. “One of the things that stood out about Egwene the most when I auditioned were the three scenes I received. They were all so different and showed a real versatility to this character, and I just thought, ‘Wow, whoever gets to play her will have an amazing journey going through these emotions with her,’” she says. So far, that journey has included a lot of personal growth and learning for Madden, who has applied Egwene’s experiences on-screen to different circumstances in her own life. “That’s another beautiful thing of what we do. We are contributing to this story and helping to bring this character to life, but it’s also the characters that help you,” she adds.Egwene is considered one of the most powerful female channelers in the series, but it’s her determination and appetite to learn that were appealing to Madden. “She is fiercely independent and strong and eager to learn and has an incredible sense of duty and is constantly breaking social norms,” she says. “I think that is something that resonates with a lot of people, particularly now.” Madden herself is familiar with that kind of liberation. Growing up, there was no topic too taboo or off-limits for the dinner table, which allowed her to form strong opinions on important issues from a young age. Of particular importance was creating more visibility for her Indigenous heritage. At the age of 13, she delivered a speech to the nation on the future of Indigenous Australians, and one of her early acting projects was Australia’s first Indigenous teen drama, Ready for This. As she was raised in a proud Black family, it’s not lost on the actress that the hard work and sacrifices her family made have afforded her the opportunities she has today.As far as how acting came into the picture, Madden can’t pin it to any aha moment specifically. It’s just been second nature because she is around so many creatives like her mother, a curator, and her aunt, a director. Classic Audrey Hepburn films and the musical Fame were major influences, too. She and her siblings were always encouraged to be expressive and explore the arts, and when Madden realized that acting allowed her the freedom to be whoever she wanted to be and that it was celebrated, she knew it was her calling. With her breakout performance upon us, we can certainly attest to that.  The Wheel of Time is now available on Amazon Prime Video.