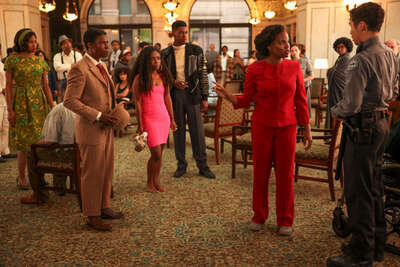 Premiering on the CW today, “4400” aggressively tries to win over the people who obsess over shows like “Lost” or “The Leftovers,” but with less tact (this series is a remake of a USA Network show that came out in 2004, the same year as “Lost”). Shanice (Brittany Adebumola) has just left her kids and husband for the day, the opening credits haven’t even started yet, and suddenly a green light sucks her out of the car. The screen cuts to black. She finds herself in Belle Plaine, a park in Detroit, where other people have been landing as well.  Shanice is one of 4,400 Americans who were considered missing from their different periods, and landed in 2021, now quarantined. They range from different eras, like Claudette (Jaye Ladymore), a civil rights protestor from Mississippi in the 1960s; Isaiah Johnson (Derrick A. King), a smooth-talking reverend from the ‘90s; a mid-2000s reality star named LaDonna (Khailah Johnson); a hippie girl named Mildred (Autumn Best). The most out-of-their-element person is a WWI surgeon named Andre (TL Thompson), whose properness is bracing among this group.  At least with the pilot episode, these characters are as curious as the mystery that has brought them together. But the storytelling is all about keeping them in the same room or so, sitting and talking to each other. It’s a dull visual approach, and brings out the corniness of the premise that needs to be distanced from for this to work. It also takes far too long for everyone to realize they’re in a different time period, a goofy beat that could have been more impactful if the show had more faith in its characters.  This strange phenomenon inspires crises across the board, and the tensions that don’t have to do with the actual time-zapping premise prove to be its most compelling. Shanice’s yearning to be back with the family she suddenly disappeared from is a unique way to focus on regret, and the types of things we can’t change. I’m also curious to see how the series will play out its work tension between social worker Jharrel (Joseph David Jones) and the lead agent Keisha (Ireon Roach), as the set-up does try question about who is better serving these people and their needs, regardless of how extreme the scenario is.  But in spite of its earnest ideas however tacky execution, “4400” is not about grace or subtlety when it comes to these ideas of history, or its drama. That’s not a bad thing itself, but more that the show constantly has an air of trying to force its air of importance, whether it’s the big twists that come every five minutes, or the whole big question that the series uses as the reason to keep watching. There’s little room for characters from other eras to introduce themselves as more than figures who seem to have picked from a history museum’s reenactment cast.  “4400” unfolds like the kind of show that’s more often written with flashy twists first—what if Mildred also had super powers to control objects?—without a lot of natural room for story. I imagine that overly big, busy nature be the case with the larger reveals that truly give the show its shape and character. We know that there’s a certain grandiose reason for all of this, and that there are ideas about history and race in between the lines, but this first episode doesn’t give us hope that the answers are going to be all that subtle. First episode screened for review. “4400” premieres on the CW on October 25th.